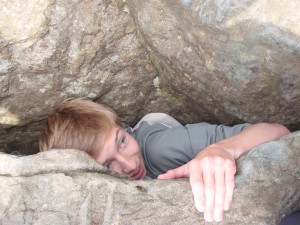 ‘Awesome, wicked, a nightmare, squashed and squeezed – thanks for the encouragement Joe. I loved it after I got over the fear of getting stuck in there!’  Isaac.

Nearly there – it is a bit tight in here! 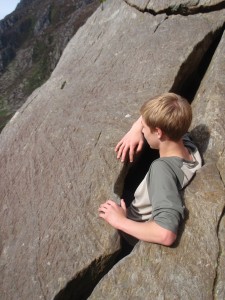 One more push should do it. 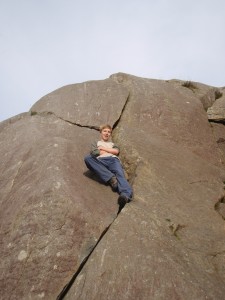 Sorted – that was brilliant.

‘Hi Joe, we just wanted to say thanks very much we had a great time learning to navigate.  We learnt such a lot under your friendly guidance, as well as giving us a fun experience.  Thanks for the helpful advice so that we can continue to improve.

We had not been in the Ogwen Valley before, so navigating in such stunning scenery was a real bonus. We look forward to coming back to North Wales for lots more walking and practising our navigation skills.’ Steve and Isaac.

Our Introduction to Hill Skills and Navigation is ideal for beginners or those with some experience wishing to build their confidence.

Sandra and I were climbing in the Llanberis Pass recently and observed a climber getting into difficulty. The ‘call’ the second climber was making to the lead climber was unclear. As a result the ‘call’ was misinterpreted by the leader.

The climber required a ‘tight rope’ as he negotiated a difficult section on the climb. However, his instruction to the lead climber was “take in slack.”

The leader interpreted this as ‘slack.’ That is what the lead climber heard with the direction of the wind and the distance between the two climbers. The lead climber duly let out more rope. This happened twice and by now the second climber had a loop of rope below him. He started to look uncomfortable on his stance.

Sandra (who could see the climber below her) called up to me, to shout instructions to the lead climber to ‘take in’ the rope, which he did and their climb continued without incident. Of course, it could have been a different story.

Remember, climbing calls should be clear and unambiguous.

Take In’ This is the call from the climber when they require rope taking in.

‘Slack’ This is the call a climber makes when they require more rope.

DO NOT put the two ‘calls’ together in the same sentence.

Other climbing calls are: